The line that divides in two, symbolically. What is the pictorial function or what is the aesthetic input of a line consistently dividing the work vertically. It accentuates without there being anything that needs visual clarification. It is an arbitrary symbolic arrangement that gives meaning just by being there. Because it differs in colour and thickness on each work it has no meaningfulness by itself. It is a symbolically dividing gesture that, although there is nothing to be divided, completely changes the painting. It is a gesture, a hand stretched out across the painting. Or maybe it is more correct to say 'on the painting'.

The line is like the final word of a sentence; a final word that defines the full meaning of that entire sentence. The line provides meaning retroactively. The line floats. The line does not only divide the image, it primarily divides the surface. The line is no part of the composition of the image as a subject. It is no part of the brush strokes that draw up the image, it was the last element to be put on the canvas. Maybe even days later when the paint had already dried. It is an addition providing a surplus, (literally) onto the image. The line floats above the image and provides draught but no depth. Draught on an artificial symbolic level, with 'symbolic' meaning 'providing order'. Obviously every brush stroke is artificial, but the strokes in the image compose the subject in order for it to present itself in such a way. This line, however, does not present, it divides. And it does not divide the image, it divides the image space.

How can one define the space of a painting? A painting creates an imaginary space, creates the possibility of connecting brushes of paint to an observing subject. In the act of observing the image comes into existence time after time, every time different from the desirously observing subject. A painting is not something that 'is', it 'has to become' each time again.  While a museum guard might just be checking whether the painting is not hanging askew, another visitor might relive his own past with his deceased spouse by looking at the 'same' image. The cleaning lady who just happens to walk by might think about taking out her swiffer again. Three times the same painting, three completely different affects.

We acknowledge the true contribution of the line when we keep it separated from the image. It provides a separation between 'in front' and 'behind'. That is the draught I was talking about, draught without depth. It is an independent surplus that has to be respected as such. It exists outside the image, does not want to be involved in the painting itself. Its 'view' is detached, its position vis-à-vis the painting is aloof. It is like on off-screen commentary of which we do not know the exact meaning. Therein lies its strong input. We have seen the line as the line of the image/screen that Lacan places between the object and the beholder and that is the blot that captures our look through the memory traces. 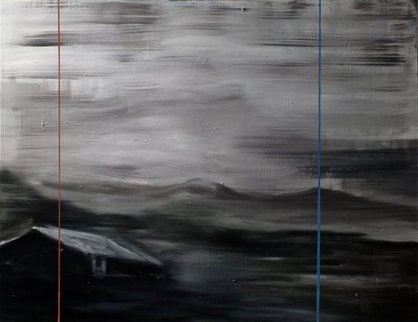